GearOtaku which offers a variety of different Anime Merch that are designed based on many other Anime characters will be a place where you can immerse yourself in your Anime world. It's a good idea to carry an anime backpack. Whether it's a canvas bag with anime characters on the surface or a bag that holds anime peripherals, you can get these items at Gearanime.com. However, there are a lot of things to take into consideration while selecting the best college bag. When buying a new college bag, factors like material, water resistance, size, and price are among the most crucial. I find something appealing about uniforms' organization, homogeneity, and anonymity. Another popular school bag for laptops in Japan is the backpack, which is most popular with young children. These cool backpacks are made from many kinds of materials which offer you many choices. The images on each item frequently appear in anime and manga so that you can easily cosplay your favourite Anime characters. Gearanime offers an entire collection of  Anime backpacks that are inspired by the image and personality of each character. These designs give you a unique, fashionable feel and cool appearance. Check it out right now! 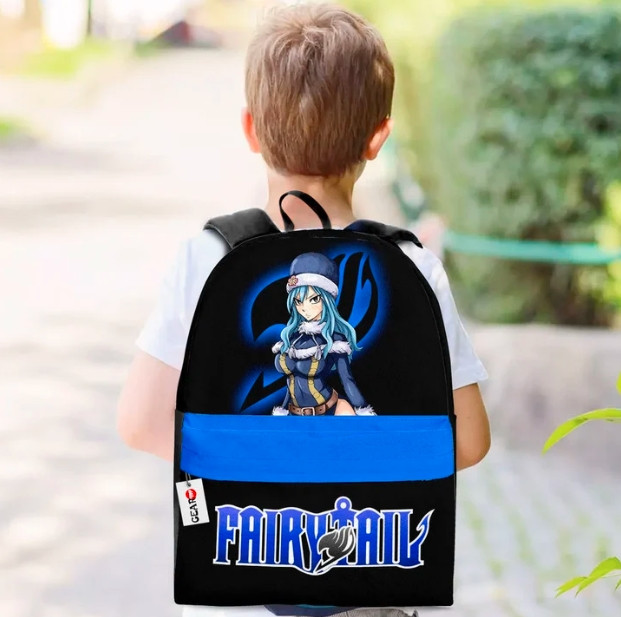 Anime backpacks are one of the unusual fashion items that many young people, particularly those who enjoy the anime world, are interested in. The anime series is the most popular comic book and film franchise that has brought Japan closer to foreign audiences. The Japanese anime/manga industry has brown eyes in audiences all around the world because of its distinct aesthetic. Each character has a distinct and distinctive trait. Gearanime has a large selection of Anime backpacks that depict the look and spirit of the majority of the characters in the anime.

A series we all connect with childhood is Sailor Moon. Since its publication, the series has made a lasting imprint on readers' hearts in numerous ways. Sailor Moon's characters are very attractive and lovely, which serves as an inspiration in many different sectors. Sailor Moon bags are sought after by young people for their distinctiveness and originality in their designs and colours. They are inspired by personalities and characters from the same-named television series. Additionally, these backpacks will make beautiful presents for your friends, particularly anime enthusiasts.

The superhero manga series My Hero Academia is well-liked in Japan. Readers are drawn to the series by the wide range of characters and exciting elements in the plot. The My Hero Academy backpack was specially made by the Gearanime team in response to client requests and inspired by the incredibly appealing characters of the series. The quality and elegance of these shoes are greatly admired.

If you enjoy watching anime series, you won't want to miss the anime backpacks, which are designed to reflect the personalities of the various characters. These Dragon Ball Backpacks are a unique blend of creativity that is suitable for both boys and girls. Since its premiere, Dragon Ball has earned a reputation as the most amazing and popular anime series ever. As a result, Dragon Ball packs are now more popular and anticipated than ever. Characters from the Dragon Ball series have a direct influence on these designs. At the same time, users gave these products favourable reviews. In addition, these shoes are well regarded for their superior quality and innovative design.

The manga adaptation of Attack on Titan has gotten a lot of favourable reviews from readers. The television show rapidly grew its fan base. Young people have therefore started to seek for Attack on Titan backpack since its release. Due to their uniqueness, Attack on Titan backpack designs are constantly sold out and need to be replaced. These products rank among the top favourites on GearAnime.com. The inside laptop pocket, which measures 13.5" x 10.5" / 34 x 27 cm, can accommodate most ordinary computers.

Inspired by the attractive characters of the One Piece series, Gearanime.com has exclusively designed the One piece backpack which can be a fantastic gift for your friends who are into Anime manga. If you're looking for an item that shows your favourite Anime character, but still has to put quality first, then these One piece backpacks are the perfect choice for you. Besides the eye-catching colour and dynamic style, the One Piece shoes are also recommended for their quality. This mini backpack helps you carry your stuff, express yourself, and keep your hands free, it's a win-win. With the vivid all-over design, these cool backpacks are printed for you when you order and it’s also a durable 100% polyester shell.

What are the names of the backpacks in anime?

Ever questioned why nearly every primary school student in Japan is seen with a leather backpack? They are known as "randoseru" in Japanese, and they frequently feature in anime. They are a very well-known symbol in Japanese culture.

What are the bags in anime called?

An ita-bag, also known as an ita bag or bag, is a handbag, unisex backpack, or another type of material bag decorated with figurines, buttons, badges, and other fandom-related memorabilia. Ita-bags are a common item of clothing among female lovers of anime and manga in Japan.

What are the hottest backpack brands?

We independently investigate, test, evaluate, and recommend the best products. So, listed below are the five most cute backpack manufacturers you've probably seen on campus, in no particular order. Sherpa Supply Co For the Canadian company, simplicity is everything.

Anime backpack gives you a unique, fashionable feel. The best part of a student's life is without a doubt their time in college. And if you really want to enjoy your time at college, it's crucial to pick your accessories wisely so that you can focus on the main things without any distractions. While getting ready for your first day of college, there are many things to think about, but there are a few necessities that you should pick carefully. By keeping these things in mind, we'll discuss about the top college bags under Rs 1000. If you are also finding it difficult to choose an ideal college bag, visit our website Gearanime.com to choose the best items.

Anime backpacks which are available in small or big sizes have become one of the favourite trends not only for Anime fans but also for fashion lovers in general. Creativity, originality and novelty in each design idea have helped Gearanime's Anime backpack collection closer to customers. Do not forget to consult and choose the most impressive and unique models at our main website, Gearanime.com.